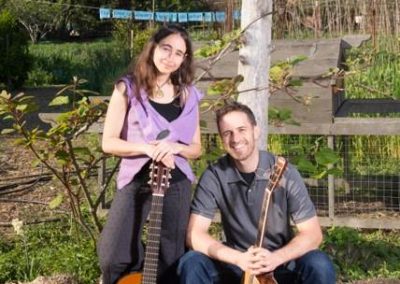 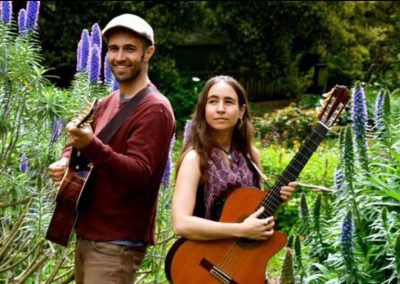 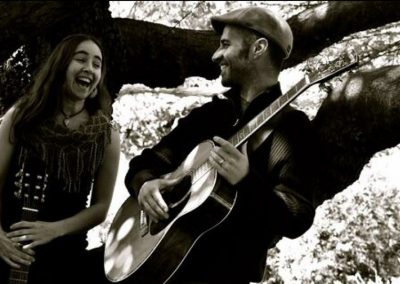 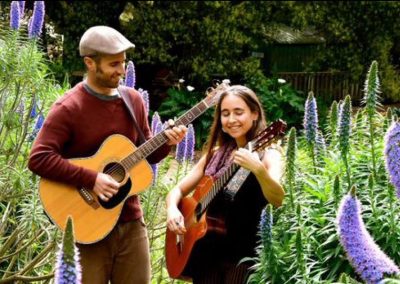 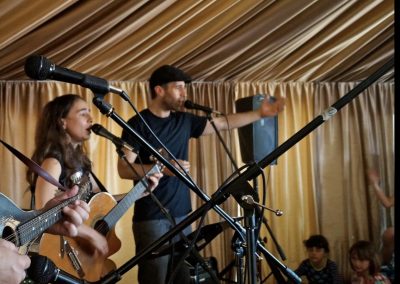 Two of the Bay Area’s premiere children’s performers have joined forces to create inspirational, uplifting music that will speak to parents just as much as it will to kids. Melita and Isaac weave together beautiful harmonies, meaningful lyrics, danceable rhythms and engaging classics to get you singing, moving and ultimately put a big smile on your face. The songs reflect respect for the natural world, a peaceful planet, as well as the Jewish culture and heritage.

Both of their albums, “My Roots Go Down” and “Rising Songs, Turning Tides,” are sure to appeal to lovers of folk music and camp-style sing-alongs, as well as those who appreciate contemplative music and prayer. Melita and Isaac’s music can engage people of any age or generation.

To hear a podcast with Melita and Isaac Check out: Good Stuff Kids with Michael Mason

Melita is a music teacher and musician in Berkeley, CA. Alongside teaching at an array of schools and venues for children in the Bay Area, she is a founding member of two popular Bay Area children’s bands – Octopretzel and Kid Kaleidoscope. Melita has a deep appreciation of nature and animals, children, yoga, health and healing and of course music. She is also the mother of a wonderful 13yr old girl.

Isaac is a San Francisco based musician specializing in Jewish, spiritual, folk and family music. He teaches music classes, leads prayer services, does concerts and performs for weddings and other celebrations. Isaac has worked many summers at Camp Tawonga, near Yosemite, and plays with a party/simcha band – Shamati. Before turning to music full-time, Isaac was the founsing director of the Moishe House. Isaac lives with his partner Vivian Santana and is also passionate about playing sports and being involved in social-justice work.

Melita and Isaac’s music has been selected for distribution through the PJ Libary, and also wonParents Choice Awards in 2016 and 2018.

If you're interested in having Melita perform at your event or teach a music class, please click the button below!

Shop Now
Get updates on new music and upcoming shows and classes!

Get updates on new music and upcoming shows and classes!